You have probably already come across Carl Sagan’s words that “every child starts out as a natural-born scientist, and then we beat it out of them”. Watching my 4-year old picking up hands full of sand and experimenting with the distance the wind carries it if he blocks the wind’s path completely, partially or not at all, I am bound to believe that. (Let’s forget for a moment that this happened in the second inning while he was supposed to be guarding First Base, and that he was almost flattened by the base runner.) The good news for me here is that my job to raise scientists just became a whole lot easier. With the spark already there, I only have to keep alive that wonder about how the world works, encourage them to never stop asking more questions or looking beyond what is known. As long as they keep enjoying the process of discovery they will always be scientists at heart. 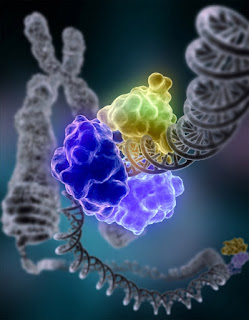 My favorite tool for that is the phrase “Follow the evidence” (raise your hand if you just pictured Gil Grissom in his lab surrounded by bugs). I used to just answer questions such as “Why do the peonies in our front yard always bloom 2 weeks after the ones in the backyard”, “Who ate the last piece of cake” or “Why does that bird swoop over our heads every time we leave through our front door”. I was stuffing my kids with facts, but it left little room for them to do the exploring. So now my answer is always “Follow the evidence”. And follow they do. It makes them go closer. Look longer. Collect more details, make hypotheses and check them against things they already know to be true. Sometimes they groan, because it is work to find out for yourself instead of being fed the answer. But once they have followed their evidence and come to a conclusion, their satisfaction more than makes up for that. Especially when I can verify that they got some things right. Plus, the stuff they come up with is often just so innocently sweet. My 4-year old decided the peonies in the backyard feel more loved because we spend more time with them, which makes them bloom earlier.

Of course with everything in parenting, no good deed goes unpunished. Easter Sunday evening my 6-year old walked up to me and said “I think the Easter bunny is not real. I looked at the evidence and it makes no sense that he would be real”, then proceeded to present three minor errors I had committed while covering my tracks. He did not even ask “if”, or give me a chance to explain away anything. He was certain he had gotten it right. A month later out of the blue, he was wondering out loud if Santa might not be real either. He knew he had no evidence against Santa, but extending the logic of the Easter Bunny, why would Santa be real?

Oh, what to do? Create more fake facts that make Santa sound plausible? Or congratulate him on completing this quest of following the evidence and arriving at a logical conclusion? I chose the latter; I just did not have the heart to crush his accomplishments under a mountain of lies. And judging by the evidence of his smug grin, I think it was the right decision. I totally made his day. For those of you worrying about the Santa magic, he said it’s okay that I turned out to be Santa, as long as he still gets the same presents (yes, the priorities of a 6-year old ...). So there. For my budding scientist following the evidence and learning the truth is more satisfying than believing in something beautiful, but imaginary. And it is my job to keep it that way.

The most infuriating moments of being a first-time mother were when my husband would defer an important decision to me with the words “you are the mother, you have motherly instincts, your common sense will tell you what to do”.

Trained in making decisions based on data, I was reading every piece of parenting advice I could get my hands on. My assessment: most are subjective, unscientific, contradictory (if you have ever come across an article covering “attachment parenting” and “Ferber sleep method” in the same paragraph, you know what I mean), and as uncommitted as the smoothest candidate for public office.

I don’t know about you, but I have a degree in Statistics and Economics, and “Motherly Instincts” wasn’t part of the curriculum. And yet being in charge of nurturing the minds and bodies of 3 little humans without any special training is something you are allowed to do unquestioned until law enforcement needs to get involved. So I basically make it up as I go along. (You should start wondering now, if common sense is supposedly working so well, why is our world in the sorry state it is in?) 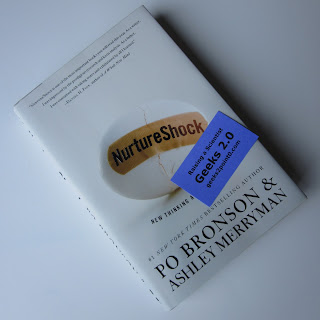 So imagine my relief when I came across “Nurture Shock” by Po Bronson and Ashley Merryman. They thought it would be a good idea to check which of the midwife tales, common wisdoms and fancy new parenting approaches are actually supported by real scientific data. Which in 2009, when the book was published, was apparently a rather novel concept. (You can stop wondering about the world now, and facepalm yourself instead).

The book spans topics from toddler to teenager, discussing speech development, lying, confidence building, the importance of sleep and more. The real eye opener for my husband and me was the chapter discussing how to raise children that are not racists (or any type of being discriminating, you can substitute race for any other attribute society might or does discriminate others by). Well-meaning parents trying to raise “color blind” children might actually reinforce the opposite (read an excerpt here).

For an encore check out the website www.nurtureshock.com, where new studies are regularly posted, discussed and interpreted into scientifically proven parenting advice. Your future geek will thank you.

Goldieblox – Blocks worth their weight in gold

If you have ever worked in an IT department or lab, you have probably noticed that the 51/49 male/female ratio promised by birth statistics doesn’t quite hold up at this point. Often cited reason is that girls’ academic accomplishments have fallen behind the boys’ in all major STEM subjects. When joking about girls being incapable of doing math is socially acceptable, it can become a self-fulfilling prophecy. (A European clothing chain thought it was okay to head this year's Spring Collection with T-Shirts proclaiming “In math I am just decoration” and "Allergic to Math").

Interestingly enough, it seems girls are resilient against these types of smear campaigns and stereotypes.

A recent study found that the problem is not so much that girls and young women don’t excel in STEM fields, but rather that they choose not to pursue them. So how do we ensure that girls are not only good in science, but enthusiastic about it? Some researchers think that combining storytelling and science might be the way.

Cue in Goldieblox - winner of the most recent Parents' Choice Gold Award. 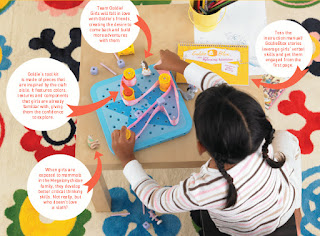 I first came across this gem of a toy last year when it had just completed its first round of kickstarter funding. Goldieblox is a construction toy that teaches engineering principles by combining pegboard, axles, wheels and cranks with a story book about Goldie (a girl with a tool belt) inventing a spinning machine for her friends. I ordered a set before there was a firm delivery date and waited 5 months. It was worth the wait. Besides being an adorable story, it guides children through the process of inventing, which means building, failing (!), investigating errors and rebuilding. In addition to the set built following the story, there are many other building suggestions in the book. For more advanced engineers there is also space to draw their own designs.


Despite the pink ribbon and officially being marketed for girls, this is a great toy no matter what gender your engineers are. My 4-year old son took the set I had wanted to wrap up for my daughter’s birthday with a look that said “you can try to pry this book and ribbon out of my cold dead hands. But you will fail.”

A Blob of Horror – 14th annual Blobfest in Phoenixville, PA

A Blob of Horror – 14th annual Blobfest in Phoenixville, PA

Do you love sci-fi horror movies, want to pass your passion along to your children, but are worried that starting with “Alien” might scar them forever?

Start them off with the 1958 classic “The Blob” featuring Steve McQueen in his debut leading role. The absence of blood and violence makes it suitable for children, even young ones (rated PG in Australia). One of the scarier scenes (by 1950s standards) is when the first human encountering the Blob decides to poke it with a stick. And then it, well, blobs.

Unfortunately I can’t asses for certain how appropriate the movie is for preschoolers, after about 25 minutes my then-5-year old walked out of the room on account of being bored to death. So he missed the accumulating dread in later scenes, where the blob, well, blobs some more as energetically and menacingly as a giant blob of translucent, pink, inert silicone can possibly manage.

So if you want to make sure your children savor every last second of this piece of horror movie history, catch a viewing at the Phoenixville Colonial Theater July 12-14 during the Blobfest. You and your fledgling horror aficionado are even allowed to run out of the theater screaming. In fact, you are expected to. That’s right, the Friday evening performance ends with a re-enactment of a scene filmed right here on location, at Phoenixville’s Colonial Theater.

Just think about how awesome it will be to finally do what you were thinking about a thousand times while watching “The Phantom Menace” for the first (and last) time. But hurry, the tickets for theFriday night Theater Run Out go on sale May 31 and last year were sold out by early June.

Besides a viewing of “The Blob” and other Horror classics, the Phoenixville Blobfest also offers other events around horror, sci-fi , and art. Planned are a family-oriented stage show, a Shorty AmateurFilm Contest, a costume contests, tin foil hat contest, merchant façade contest and street vendors of Horror and Sci-fi collectibles, memorabilia and movies.

The shops and restaurants in the 3-block Phoenixville downtown area surrounding the Colonial often have special happenings as well, such as comic book swaps or life music. I will keep you updated on this year’s plans once we get more info closer to the event. So save the date!