My children like reading reference books and encyclopedias (knowing lots of random and seemingly useless facts is a bona fide geek skill, after all). So I was thrilled to find a new kind of book just in time for the holidays.

Randall Munroe, author of "What if?" and the xkcd comics, took up the challenge to explain complicated concepts by only using the 1,000 most common English words. Sounds easy? Well, you try explaining baseball without the use of the words pitcher, catcher, bat, or strike then. 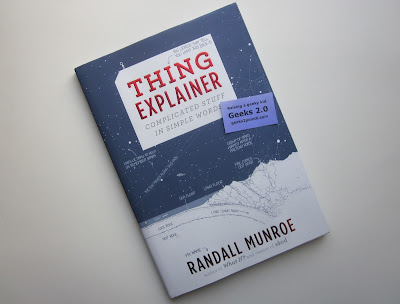 Going along with the fantastically simple explanations, "Thing Explainer" (a sample here) also contains wonderful blueprint-style drawings and diagrams for items such as the International Space Station, submarines, dishwashers and sports. So besides being a great reference book children can read themselves, it is also great for parents who struggle to explain technology or scientific concepts to smaller children, who still lack most of the vocabulary used in these fields.


Goldieblox, the toy company that combines my two favorite topics - reading and construction - has released several new toys since I first wrote about them.

A parade float and a dunk tank were sets 2 and 3 to be released. The dunk tank was a bit hard to put and keep together because the rods kept slipping a bit further into the cubes than they should. But it seems the engineers at Corporate are just as quick as the ones in my living room. Based on customer feedback they have already redesigned the blocks to have stoppers and sent us replacements free of charge. This works great now!

If you want to see the parade float in action, check out video's from the last two years' Macy's Thanksgiving Parades - Goldie was there with her own float!

But the biggest hit under last year's Christmas tree was the Goldieblox action figure. Just to show you how much Goldie sets herself apart from Barbie: this girl does not come with a change of clothes (what's more practical that overalls anyway?), but with a change of transportation - her very own zip line! At 11 feet long we had plenty of opportunities to build rides for her around the house.

This year, we are looking forward to the The Builder's Survival Kit, which will include over 190 additional parts and ideas to build bigger structures by combining all previous sets (something I had hoped for ever since set 2 came out).


If you google "Space Dogs" you will find plenty of Disney books and movies that are mind-numbing rather than valuable contributions to Science Fiction for children. But when I accidentally stumbled across a new book with the same title at the library, it turned into the most hilarious bedtime reading we had in a while.

Remember Leika, the first dog in space? According to Wikipedia Leika died in space. But according to Justin Bell and Evan Croker, a SiFi writer duo from Down Under I hope to read more from in the future, Leika ended up flying through a wormhole and landed on the planet of Gersbach, populated by intelligent beings similar to humans, just a lot tinier. When the planet's structural integrity is threatened by a Disturbance of Gravity (D.o.G) originating from Earth, Gersbach Space command sends a space craft to Earth to establish contact and save their civilization. 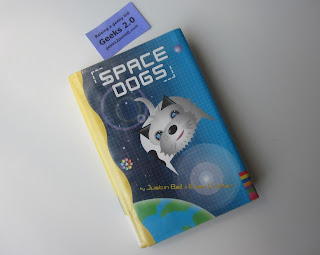 Unfortunately, there are several flaws in the plan. For one, Gersbachians assumed that Leika was a representative of the dominant species on Earth, so they shaped the space craft like a dog. As a result, First Contact with Earth's life forms would have made Captain Archer's Beagle proud, but left the Gersbachian crew rather embarrassed. Looking like an adorable pet, they are soon adopted (against their will) by 6th grader Lucy, and are thrown into the struggles of daily family life. And second, a renegade former colonel stole a proto-type dog-craft with the objective to collect the D.o.G. and blackmail Gersbach.

What made the book such a good read for all of my kids was the alternating view points of the Gersbachian crew versus Lucy and her sister Amy. The crew's story reads like a Star Trek episode with technical commands, 23rd century technology integrated into dog anatomy in hilarious ways, and lots of action sequences with an evil adversary. The story of Lucy and Amy, on the other hand, tells of the anxiety to fit in at a new school, complicated family life after the father can't work anymore due to injury, and Amy's crush on the coolest boy in school.

The only thing this book left us wishing for was the movie-adaptation. Laser nose. Need I say more?