"Red Delicious are the best apples ever!" proclaimed my oldest. If you make such a claim, you better make sure it is accurate. Ever so helpful I asked him what other apples he had tried and compared. "Uh, those yellow ones you buy? Of the two kinds of apples Red Delicious is the best".

MAJOR parental oversight. How is he ever going to win in Jeopardy without knowing at least 27 varieties of apple. So I decided it was time to teach useless trivia to the kids by the means of an experiment. It's what scientists do! We were going to have an apple tasting. So off to the grocery store with the mission to buy one apple of each kind we could find. Ignorant about apples that I am, I thought that would mean about 6 or 7 apples. The kids enthusiastically guessed 16-20. We found 15. Had we agreed on "The Price is Right" scoring rules, I'd have won this one.

Evel Knievel was still insisting that Red Delicious are the best apples, and said he would give them the highest scores. The statistician in me raised an eyebrow and took up the challenge. So we put the experiment on hold and talked about objective data collection and cherry-picking (with a little unplanned excursion on why it isn't called apple picking) . Finding the best tasting apple we need to assess taste only. No favoritism! It is a small step from favoritism to profiling, and from there to discrimination. You have probably come across the countless studies how essays or resumes get graded or viewed very differently based on the gender or race associated with the name in the first line. Lesson of the day, collect the data that IS there, not the data you EXPECT to be there. Never assume.

So after writing number cards for a true blind tasting, we continued. While I cut and peeled 15 apples (what was I thinking?!), the boys designed our scoring sheet. Credits for illustration go to Evel Knievel. 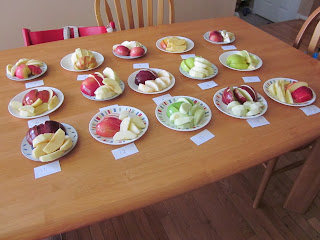 And then we ate and scored and settled once and for all which apples to buy for the family. 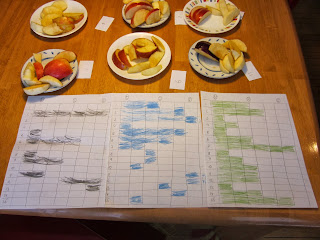 The outcome? Evel Knievel prefers Paula Red, Pink Lady and Red Delicious. Although I think he cheated when he recognized Red Delicious by taste. Mr Entropy likes Honey Crisp and Pink Lady, but he made it only half way through the sample, so incomplete data here. The Queen stated her favorites are the ones without the crust, which then triggered a lecture by Evel on the difference between crust and peel. Then we forgot to ask her again. I preferred Sweet Tango and Gala. Finding the best apple choice for the family turned out to be a lot more complex than expected. So we wrapped up the experiment by baking 4 apple cakes with the 15 three-quarters of an apple that were left over after the tasting. Like the space shuttle program bringing you the Teflon pan, science sometimes has unintended benefits.

With the apple conundrum solved by creating just more disagreement on what's the best apple, my husband delivered the final lesson on science - that any great findings without a clear implementation plan are doomed. He simply keeps buying the apples that are on sale.


Other things to sample and score:
- Ice Cream!
- Yogurts
- Cheeses
- Breads
- Canned beans (be ready to cook chili)
- Lemonades or juices
- Tropical fruit you have never eaten before

How do you teach the scientific method to your children? Leave a comment!