Col. Chris Hadfield - a name your kids should know

Do your kids know who was the first man on the moon? How about the second? Or the third member of the Apollo 11 mission, who stayed behind in the command spacecraft? I'd venture to bet that in our generation everybody knew who Neil Armstrong and his crew were. But over 40 years later, for a 6-year old he is a historic figure as ancient as Lincoln, Washington, or Genghis Khan.

I found it futile to create excitement with my kids for the Apollo missions, or even the Space Shuttle. The best they can offer is grainy old TV footage with mostly incomprehensible sound. So instead we made a fresh start and followed Col. Chris Hadfield into space. 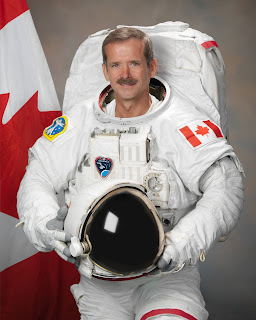 Col. Chris Hadfield had previously been part of several Space Shuttle missions, but he just completed a 5-month mission of being in command of the ISS. (Thanks to my Canadian friend who pointed me his way!) Col. Hadfield is going with the times and has a Facebook page with amazing pictures of Earth taken from the ISS. On the Canadian Space Agency's YouTube channel he covers topics kids are actually interested in.

How do you command the ISS? Do astronauts have to eat their vegetables, and do they get dessert? Do the five senses Taste, Hearing, Smell, Sight and Touch work differently in Space? Can you cry in space? Where do astronauts sleep? And of course the most important question of all: how do you go to the bathroom in space, and what does that have to do with shooting stars?

He also posted (and keeps posting) many pictures and stories from his mission preparations and post-flight check ups, in case you or your kids are also interested in the 95% of being an astronaut that are not space-riding cowboy but literal blood, sweat and tears.

So, long story short, I think every little geek should grow up with a role model who has made the trek to space and back. Don't let the large number of pilots, scientists, mission specialists and commanders that have been and will be up in space be an excuse to not get to know one of them closer and make them the childhood hero of your kids. Or even rekindle your own interest in what they actually do up there on the ISS, other than creating shooting stars. (Answer: renditions of David Bowie's "Space Oddity" while hunting down dark matter)