She's got a Ticket to Ride

I love board games. I grew up with dozens of them stacked into my shelves, and every birthday party or gathering with friends ended up with a board game being played sooner or later. Being German, that did not even qualify me as a geek, because Germans take their board games really seriously. It is the unknown third national passion after soccer and beer. Germany hosts the world's largest international board game expo, a 4-day event where 149,000 visitors test and play new board games every year. That is almost more people than there are breweries in Germany. Did I mention Germans take gaming seriously? 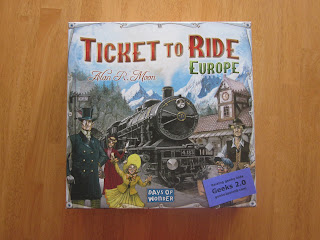 Our newest addition at home tested by my Geeks 2.0 is called "Ticket to Ride". It is a great combination of strategy, geography and building trains. It won "Game of the Year" 2004 in Germany and the 2004 Japan "Best Advanced Board game" prize (the Japanese are another nation who don't fool around when it comes to games). "Ticket to Ride" is also highly popular with the board game playing community. Fewer than 300 of over 16-thousand raters on boardgamegeek.com gave it less then 5 out of 10. I have decided these 300 people must simply hate both geography and board games and thus aren't worth listening to anyway. 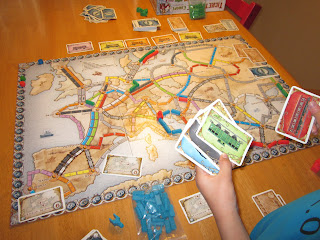 The game is played on a large map with cities connected by colored train routes. Players have to collect a matching set of colored train cards to be able to claim a route for themselves. Building trains earns points, which are tracked by markers on the side of the board (built in math session on two digit addition). Players also get secret tickets. If they manage to claim the routes between the two cities on their ticket, they score extra points. If they fail to claim a ticket, these points get subtracted at the end of the game. The fun part is that the tickets are kept secret until the end of the game, when the first player runs out of trains to build. So you don't really know who is ahead or behind, or who will win or lose until the end of the game when the ticket points are added and subtracted.

Officially the game is labeled for children 8 or older. But by simplifying the rules, like not keeping tickets secret, allowing trading, or waiving special rules around tunnels and ferries, it can easily be played by 6-year olds as well.


Still not sold that this is a great game? Then play it with the matching "Ticket to Ride" sound track, courtesy of The Beatles ("Help!", from the same album, is another song that applies to a board game sooner or later), and give an extra point to the player with the best fake Liverpool accent. Two if they can find Liverpool on the map.

Price: approx. $38 for the stand-alone editions and $30 or less for the map extensions


What games with geek factor are your kids playing? Leave a comment!